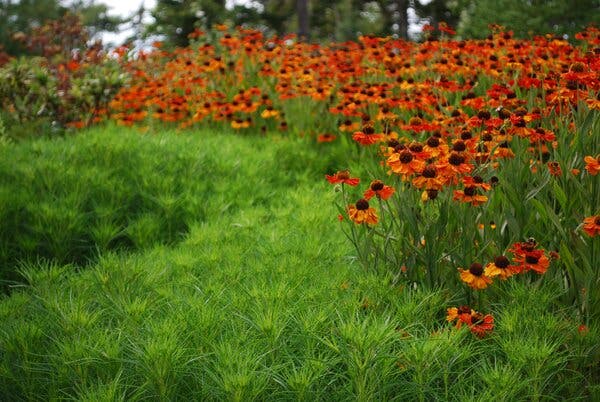 Grab your iPhone: Andrew Brand wants to show you a side of your garden that you’ve never seen before (and how to photograph it).

“Look at that caterpillar,” Andrew J. Brand said one afternoon, as we passed a hummocky old bottlebrush buckeye shrub in my garden.

What caterpillar, I thought, quickly training my eyes in the direction of his gaze rather than embarrassing myself by acknowledging that I hadn’t noticed anything.

What he had spied looked to me like nothing more than just another of many twigs, jutting from a branch at a slight angle. But it was not a stick. It was a stick caterpillar, the well-disguised larval form of some geometrid moth or other — a creature so inconspicuous, so cryptic that it can eat without being eaten, hiding in plain sight from everyone. Except for Mr. Brand.

Maybe it’s not surprising that someone with a master’s degree in tissue culture — propagating plants from small pieces or mere cells of the original — should have a keen eye for the finer points of living organisms. His task when he was earning his degree, aided by magnifiers and microscopes: “Working with teeny-tiny things, chopping them into little pieces and really looking at the minutiae.”

Little has changed since then, it seems. But Mr. Brand’s current mandate as the director of horticulture for Coastal Maine Botanical Gardens, in Boothbay, is to make certain that big-picture scenes grab us, too.

The 300-plus-acre public space, which welcomed more than 250,000 visitors in 2021, includes more than 20 acres of display gardens with nature-focused features like an apiary for honey bees and a native-bee exhibition. A native-butterfly-and-moth house is planted with host and nectar plants — food for both larvae and adults — carefully matched so that each species can complete its entire life cycle there.

Beyond the cultivated areas, trails invite visitors deep into the Maine woods, along narrow paths through woods of towering spruce and pines, toward a tidal river with sea gulls and ospreys.

The public aspect is one of the things that Mr. Brand likes best about the place where he started working in 2018, after 27 years at Broken Arrow Nursery, in Hamden, Conn., which specializes in rare and unusual plants. He was the nursery manager there, and as he does now in Maine, he kept an eye on the botanical goings-on and also found himself observing visitors as they observed the gardens.

He can’t help himself: He wants to make sure that everyone experiences the equivalent of our caterpillar moment.

“Did you see that?” he asked a couple he was watching as they took in the bigger scene at the children’s garden in Maine late one summer. Then he stooped to offer an impromptu tour of the tiny, spotted flowers of the toad lily (Tricyrtis hirta) near ground level.

No, they had missed it. Their reaction: “Unbelievable.”

When there is no audience, a tiny marvel like the toad lily, a shade-garden plant native to Japan, may have Mr. Brand reaching for his iPhone camera. He did exactly that one February day, when he spied a single, backlit floret of a faded Hydrangea paniculata that was still hanging on.

Sure, the shrub’s summer effusion of hundreds of florets clustered into each of the many giant flower heads had been arresting, a crowd-pleasing moment. But it was the pattern in that individual floret that captured his attention, so he had zeroed in.

“Nature’s stained glass,” he commented on his Instagram page when he posted the close-up of that long-gone-by bloom. Mr. Brand is neither social-media influencer nor professional photographer, but friends and colleagues look forward to seeing what he sees, and shares, with the hashtag #observeconnectexperience.

His way of observing is often focused on what he calls “the greatness in small scenes.”

Each small moment quietly reminds us not to rush on to the next garden chore, or get distracted by the showy, obvious stuff. Instead: Slow down and really look.

A colleague who runs the botanical garden’s shop recently asked to make some of his photos into greeting cards. (Calendars are coming soon, too.) It was a compliment, certainly, but that wasn’t what motivated him.

Even for someone with his formal botanical education and decades of career experience, the camera phone has been a window into a self-guided, lifelong curriculum. Take the phone out, take a picture — and take in another layer of understanding.

This is “digging deeper into what is not just pretty,” as he describes his continuing education, and ours. “Not just to put a bunch of pretty pictures out there, but hopefully inspire others, and myself, to learn more.”

Why is that butterfly hanging upside down under that flower, he wonders, moving in closer. Sure enough, he finds the culprit: A white crab spider had snagged the butterfly.

“And then you look up ‘crab spider,’ and you find that spider can turn yellow when it’s on goldenrod, and …” He trailed off, the ands seemingly infinite.

Zooming in for a lupine flower close-up, he considers how the native lupine (Lupinus perennis) has been nearly extirpated from Maine. Instead, the bigleaf lupine (L. polyphyllus), a Western North American species that escaped from gardens and has become invasive, is now ubiquitous along the state’s roadsides.

Peering into the screen at the beautiful alien, he said, “It starts my brain thinking, ‘How does this plant get pollinated?’ And then I stop what I am doing and start watching the bees.”

Small species can’t quite wrestle open the individual clamshell-like flowers typical of pea family members. Bumblebees are able to complete the job and get at the pollen inside, he notices, but the little guys can’t.

In bloom or not, the lupine remains a draw for Mr. Brand, especially on a foggy morning when its hair-covered leaves drip with beads of dew. To really know a plant is to see it in all kinds of weather and light — and in every seasonal incarnation.

Even winter offers plenty of material for Mr. Brand and his phone. He has become a connoisseur of puddles, seeing the possibilities (and faces) within them, including a Picasso-esque portrait and “a tapestry of frozen bubbles.”

As he admits in one post, he has a “wild imagination.”

The Stories That Dragonfly Exuviae Can Tell

Mr. Brand uses no special technique to produce his images. He keeps meaning to take an online course on the iPhone camera, but instead just continues taking pictures.

He doesn’t use filters, preferring his special effects to come from a reflection in water or a dramatic angle of light rather than from software. He simply finds his subject and frames it, zooms in and then touches the screen to lock the focus where he wants it — and takes multiples of every subject to improve his odds of success.

On a recent pond-side walk, Mr. Brand came upon various dragonfly exuviae — the outer casings of young dragonflies. Dragonflies start their lives as aquatic insects, inside a larval case. Upon reaching adulthood, they must climb out of the water, grabbing onto the stem of a sedge or other nearby plant.

The final step in the metamorphosis, if all goes well: The case splits open and the winged creature molts, ready to take its first flight in pursuit of prey, leaving the exuviae behind.

“Most people won’t know what it is if I post the pictures, or that dragonflies spend most of their life in the water,” he said, although he suspects some may have seen exuviae before, while kayaking or canoeing. “Maybe my photo will get them to think about it — and to ask, ‘What is it doing the rest of the time, in its other life stages?’”

Back in the beds and borders, Mr. Brand admits to various garden plant obsessions. He has grown more than 125 varieties and species of Epimedium, for example, and his current collection hovers around 75.

“They have a delicate, almost frail look,” he said. “But they’re so tough and durable.”

The naturalist in him is taken by the natives most of all, though — like the milkweeds (Asclepias), which thrive in such diverse habitats: wet, dry, full sun, partial shade.

Asclepias exaltata, the poke milkweed, really likes that high-canopy shade or woodland edge. Swamp milkweed (A. incarnata) can take it wet, as its common name implies. Butterflyweed (A. tuberosa) is extremely drought tolerant.

And a field of common milkweed (A. syriaca) is Mr. Brand’s idea of a good time.

“You walk out into that, and the noise from the insect life is incredible,” he said. “Plus, it smells so sweet.”

He notices some honeybees hanging by a leg in the flowers, and a new puzzle needs solving. What’s that all about?

“I love when you can get in there and just take your time,” he said, “and turn in a circle and see so many different things” — whether it’s a butterfly, a bee or a beetle.

“And it changes constantly,” he added.

The highest drama: a milkweed-filled meadow in fall, when the seedpods explode and billow off into the wind.

Some captions for images he has posted of such moments: “I’m sailing away. Floating towards the sun.” And: “New beginnings take flight.”

Be on the lookout.

Margaret Roach is the creator of the website and podcast A Way to Garden, and a book of the same name.